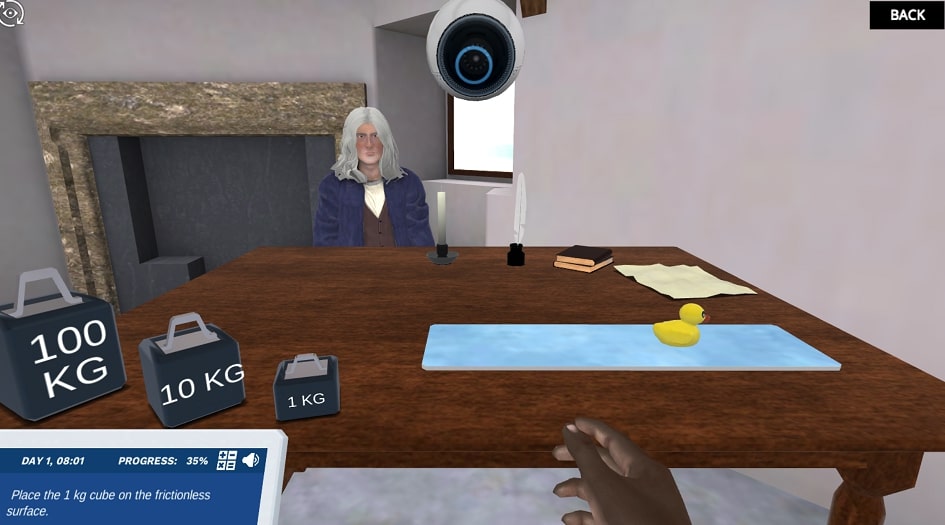 Traveling back in time and going into space has never been easier! I’m sure Newton will be surprised to see you in his room. He is quite upset since while he was working under a tree, an apple fell on his head and made him forget his first law of motion. Luckily you will join him in 1687 and with Dr. One you’ll help him remember everything about his law.

Have you ever wondered which forces are acting on a body at rest or in uniform motion? You will find your answers by doing a first experiment with Newton. You will have a hockey puck which is at rest on the table and a rolling ball. Do not be afraid to play with forces, Dr. One and Newton will always be next to you.

The Law of Inertia:

The mass of an object plays an important role in Newton’s first law of motion. You’ll learn why by playing with three cubes with different masses and a duck!

Choose which forces to apply on the cube carefully, the duck likes to quack when you don’t.

The Effect of Friction:

Friction is a force that is around us all the time and we will experiment how it influences the motion of a body and its inertia. You will have two surfaces with different frictions to play with and a duck. Will you be able to choose the right forces to win the game and save the duck?

Newton will ask you to do an experiment with him, and try to stop a body in motion by applying a counter force. As for everything, balance is the key to success. Once again, you’ll experiment with two surfaces with different frictions, but this time you’ll choose two different forces that will act on the body. Will you manage to stop the body in motion?

Newton wonders if his law still applies in space. There’s no better way to find this out than going into space. Help Newton understand what are the forces acting on him in space while moving in uniform motion.

A million dollar lab in your browser

Our virtual laboratory simulations are aimed at university, college and high school level, within fields such as biology, biochemistry, genetics, biotechnology, chemistry, physics and more.

With access to our simulations, you will have hundreds of hours of engaging, high-quality learning content available to you.

We currently have 254 simulations that cover everything from biology and medicine to physics and chemistry.

Your Diet and Your DNA

Learn how you can use Labster in your science course

Take a 15 Minute “Lab Break” with a Virtual Lab Expert

Talk to one of our Virtual Lab Experts about how Labster can engage your students with our virtual labs for online, hybrid and face-to-face courses.

Please fill out the form below to talk with one of our Lab Experts.

Thank you for your submission!

The simulation is already added to this package

Find and select the simulations that you want to add to your course.

Are you sure you want to delete?

Yes, please proceed.
No, go back.

An error has occurred

OK
IMPORTANT: Check the original email with instructions from your instructor to verify how you should gain access.

Did you receive a link or email invitation to access Labster via the Labster website? You will be using Labster Direct (URL) or our Course Manager login. Check with your instructor or read more below.
Access Labster via Labster Website

Are you accessing Labster from your school’s LMS, such as Canvas, Blackboard, Moodle or Brightspace? Click below to read more.

Are you accessing Labster through Labster Direct or the new Course Manager account login? Learn more below.

Are you accessing Labster from your school’s LMS, such as Canvas, Blackboard, Moodle or Brightspace? Click below to read more.
Access Labster via your School LMS